Adam went back to school for the new year on Thursday, and Daniel and I had plans to go out to lunch and get bagels, but he slept so late and I was so busy catching up on things from the holidays that we decided to stay in and watch Jurassic Park while I was rearranging our DVDs to make room for the new ones we got as gifts. The forecast snow started around 3 p.m., so I picked up Adam after track practice, then Paul came home early to miss the snowy rush hour and we all watched the second half of the movie together.

We all (including Daniel Wigle) watched Sherlock's "The Empty Hearse," which made me laugh in many of the places being cited on Tumblr as designed for fangirls yet did not impress me immensely overall, though Freeman's performances are always a pleasure to watch. (Gatiss and Moffat are trolls.) Then we watched this week's Elementary, which had some lovely moments involving my favorite recurring character though also introduced a bit of backstory I found both predictable and annoying. Some pictures of the view here this evening: 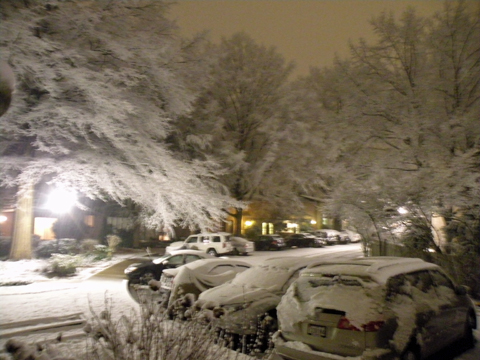