The snow that arrived Thursday evening and the temperatures in the teens that arrived early Friday morning combined to mean no school -- our neighborhood wasn't even plowed till well after rush hour. Rather than fight with the roads, Paul worked from home, so the whole family was here for lunch. Adam went sledding and to play video games with a friend, the rest of us went to see American Hustle, whose screenplay didn't impress me so much -- it takes a long time to get going -- but has utterly awesome performances and scenes that are screamingly hilarious and sad at the same time.

I finished up a review of DS9's "Ties of Blood and Water", an episode about which I have very mixed feelings -- I want to like it but it has never really moved me, though I'm probably being unfair judging it for what it's not instead of what it is. There was still plenty of snow on the ground when we went to have dinner with my parents; then some of us half-watched the Orange Bowl and did various computer activities while Adam went out again in the snow. Here are some photos of the Dominion GardenFest of Lights at Lewis Ginter Botanical Garden in Richmond on New Year's Day: 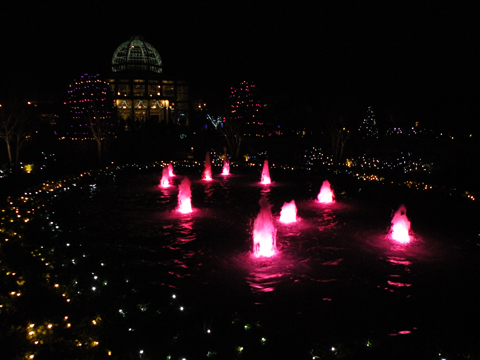