I've been promising Daniel to take him out for bagels since he came home for the holidays, but things kept getting in the way -- first family stuff, then travel, then weather -- so on Monday we were finally going to go get our bagels. Except Daniel is spending the next couple of days with Paul's parents in Pennsylvania, so he had to cancel a planned lunch with my father on Tuesday, and we all ended up at Ambrosia because we decided it made more sense to get bagels when Daniel is back and can have them for lunch over the weekend. I dragged Dad and Daniel into Target to get laundry stuff, and after I got home, I picked up Adam from school and took him to the post office to submit photos to a Scholastic contest since the entry had to be postmarked today, then we went to get gas since we've been advised to do that in addition to turning on our taps and various other things in anticipation of the bitter cold that has arrived in the past couple of hours. We also watched The Brothers Grimm, just because we were in the mood, and the new Almost Human. Here are some photos from when we went to the Mormon Temple holiday lights: 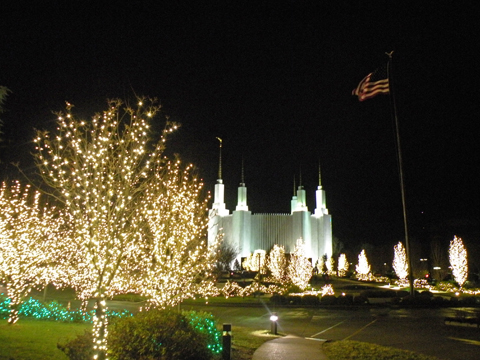 I am of SUCH a double mind about the newest Sherlock. Without any spoilers, let me say that I have quibbles but for the most part I howled through the whole thing (in a good way this time). And I am kind of boggled that the writers have now spent 2/3 of the season largely in service to what they think women viewers want to see. It's nearly the opposite of what Paramount has always done to Star Trek, namely sucking up to the young male demographic with vocalized contempt for any other audience (particularly due to the oft-cited belief that women viewers remain loyal even if a show is bending over double to try to please the boys). Gatiss and Moffat could have opted to try to impress the male demographic, yet instead they seem to be writing primarily for an audience of women who already adore them and would stick with them through a much higher concentration of blokey bullshit. As on Doctor Who, this isn't translating into awesome female characters but it is producing a show that's more about relationships than trying to be impressive within its genre as the source material once did. And I find I can't complain about that.
Collapse