We had balmy weather on Wednesday -- temperatures in the 20s! No single digits! Not that I spent much time outdoors anyway; I'm fine in the 30s and quite happy in the 40s, but the 20s are a bit colder than my fingers and toes would prefer. I did some work and some housekeeping -- I actually found and convinced Paul to throw out some Redskins newsletters from the '80s while digging in the box full of old Playbills currently residing in Adam's closet (original Broadway cast Evita, autographed Tune-Arnaz My One and Only, and the one I went hunting for, pre-Broadway engagement of Les Mis).

Because I can't resist a major awards show, even one that's usually mediocre, I put on the People's Choice Awards and was actually pleasantly surprised -- the opening bit with the 2 Broke Girls actresses (whose show I've never seen) and all the other stars was genuinely funny, especially the Sharknado reenactment, and even though I knew Hugh Jackman wasn't going to win because they only present awards to people who are, um, present, I can't really complain if Robert Downey Jr. gets to pick up a trophy. And so nice to see Sarah Michelle Gellar acknowledge support from Buffy fans. From Brookside's Garden of Lights: 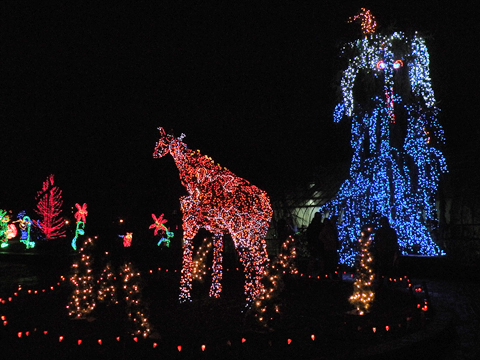