Apart from dinner out and some more digging around in closets where I have old Playbills stashed, it wasn't a very eventful Thursday. Paul worked from home so we had lunch together, though when we stopped at Petco in the evening, I could not persuade him that we needed to adopt that adorable 12-week-old kitten the cat rescue group had brought, or the slightly older stripey gray one, or the year-old black one.

Paul's parents brought Daniel back after a couple of days visiting farm shows and playing indoor mini-golf. We met them in Germantown at Sabai Sabai Simply Thai, which may be my new favorite local Thai restaurant -- we had three kinds of curry and the best tofu satay I've ever had -- though I love Thai food so much that it's hard to think of a Thai restaurant I haven't liked at least something about. I am very full.

We watched the first half of a Midsomer Murders with a younger Hugh Bonneville before we realized we were going to miss the ending if we wanted to watch Elementary, woe! Though Elementary had Paul Sorvino, plus Watson showing off an expertise Holmes lacks. And I just got to see Stephen Colbert playing Jesus from Jesus Christ Superstar while accepting cheers on his show. Some Longwood lights: 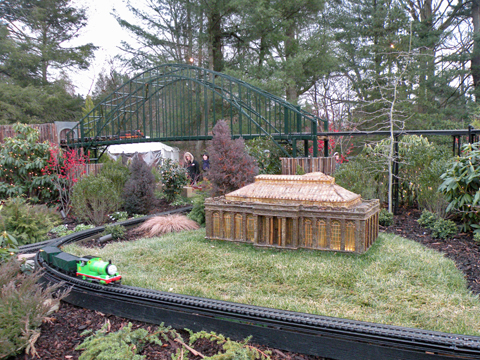