Daniel and I once again postponed our trip to get bagels because I was working on a review of Deep Space Nine's urgh-let-me-forget-this-one "Ferengi Love Songs" and he managed to sleep past noon. If I ever do another DS9 rewatch, I am skipping all the Ferengi episodes besides "Little Green Men"! But all necessary work got done, Daniel managed to download his weekend access to Elder Scrolls Online, Adam pulled off As in both Chinese and calculus for when he sends his grades to colleges, we had dinner with my parents which included kugel and Nutella cookies.

And I finally got to see Frozen! Which the kids were dubious about and mocked under their breath at first, but we all enjoyed a lot -- amusing lyrics, dirty jokes designed to go over the head of younger audiences, princesses who don't need princes. Just as interesting, I finally tracked down a copy of Song of the South which I hadn't seen since I was less than 10; the stereotypes are pretty hard to take yet at the same time it's easier to put up with racism and sexism in a film from 1946 than the bias that shows up in much more recent movies. A few photos from Yuletide at Winterthur including the annual TARDIS on the tree: 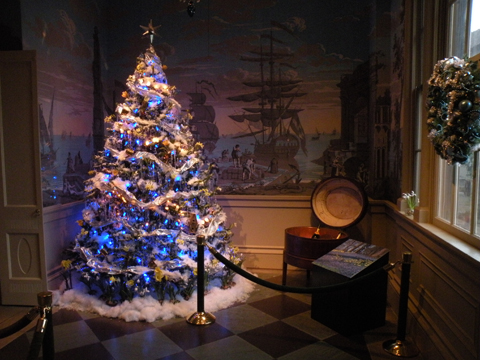