We woke to dreary rain and heavy fog that lasted most of the day, which turned us all into slugs, even Adam who originally had plans to go watch a high school basketball game and join friends at an indoor pool. Everyone was lazy in the morning and felt like a sitting-around activity instead of a running-around activity, so we went to see The Book Thief, which is excellent. I wasn't sure they could maintain the tone of the book given its unusual narration and jumps in time, plus several subplots loosely linked to the main character, but it's very well done and the acting is terrific; the kids are very impressive.

We had hot dogs and french fries for dinner and since Adam now has all his grades for the first semester, we decided we should all watch another movie. Since the boys voted for something funny or at least not depressing, we watched CBGB, which stars Alan Rickman and has several other known-from-genre actors (Rupert Grint, Malin Akerman, Justin Bartha, Ashley Greene). I don't know enough about the club or the punk scene to have strong opinions on whether they got everything right, but I enjoyed the music and the performances (the young Police scene is fabulous). A few more winter lights pics from Lewis Ginter Botanical Garden: 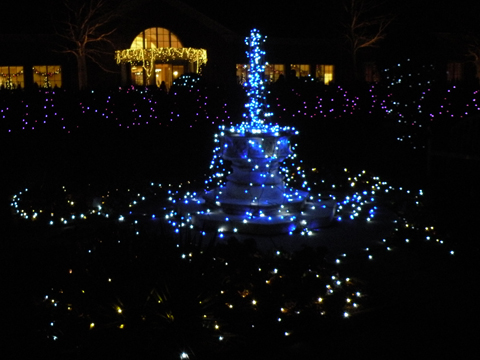