Distracted because I'm watching "His Last Vow" with the family so will keep this short. It was a gorgeous day on Sunday, quite the opposite of Saturday, so after lunch we picked up Adam who'd been working at Hebrew school and went to Great Falls. We thought the water might be as high as it was after the December snow melted, but thought it was still pretty high, we could see some of the rocks in the central section of the river. We also saw herons and ducks, plus geese in a place on the island where there isn't usually water, swimming in a temporary watering hole. Someone had left flowers on the bridge to the island, presumably to commemorate someone who had died -- we wondered whether it was the kayaker who drowned over the summer. 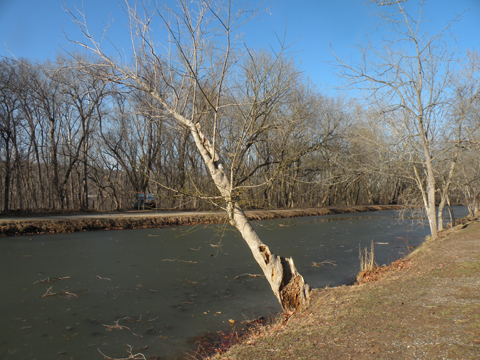 I postponed watching Sherlock all the way through for the Golden Globes, which were not really worth it; the best line was Tina Fey's about how George Clooney would rather float away into space than spend time with a woman his own age, the second best line was in the Muppets Most Wanted ad quoting an internet "review" that was a spam ad. I thought Lawrence was cute having no speech prepared since she won last year and didn't expect to win again, but then Bissett embarrassed herself and things got so bad that they should refuse to nominate anyone who won't write out a speech. (And like the Pia Zadora victory, who paid for the Scientologist in the miniseries no one I know loved to beat Bonham Carter, Mirren, Lange, and Ferguson?) The show could have been an hour shorter if they cut people stumbling to the stage. I guess I need to see Dallas Buyers Club but I'll still want Twelve Years a Slave to win the Oscar.
Collapse