Adam had his last day of finals today and Daniel went out to lunch with my mother, so I had several hours working at home with Paul, whose knee is a bit better but still hard for him to walk on since it hurts when he puts pressure on it. I forgot that it was Oscar nomination morning till after they'd been announced, but since they didn't give long-shots Hugh Jackman one for Prisoners or Geoffrey Rush one for The Book Thief, I didn't mind that I hadn't watched live. I was a little surprised Robert Redford didn't get a nod, let alone Tom Hanks, but all the women I wanted to be nominated were, and Christian Bale sometimes gets overlooked just because he's so good in everything -- not this time. (While I enjoyed American Hustle and thought the performances were terrific, I feel about it like I felt about Argo, that it's not a genre breakthrough and I'm surprised it's been so highly praised in so many categories.) The total lack of interest in The Book Thief is sad.

I saw another bunny -- probably the same bunny I saw on Wednesday -- though it was colder. Adam has no more studying or homework till next week, so I picked him up in the afternoon after track practice. Then, speaking of Oscar nominations, we took him and a friend plus Daniel to see The Wolf of Wall Street. Everything you've heard about the porny sex scenes, endless depictions of drug use, and 500+ uses of the F-word is true; if my kids were any younger than they are, there's no way I'd let them see the movie (I am hoping they took it as a cautionary tale, though the movie keeps undercutting itself by portraying its main character in a much better light than he deserves). The women's roles are all types rather than fully realized characters and to a large extent I felt the same way about Jonah Hill's character; his performance is good but there's so much comic excess that there's no way I'd vote for him over, say, Bradley Cooper's similarly somewhat over-the-top performance in American Hustle. DiCaprio is great, and tireless -- he's in pretty much every scene.

mamadracula gave me a Lego mug for my birthday -- it has indentations for the bricks and figures to attach -- which made me start pulling out all the Legos we've had in a bin since the kids were young. Plus I had to buy one of the online-only Jor-El mini figures for obvious reasons. Here are some of the results. 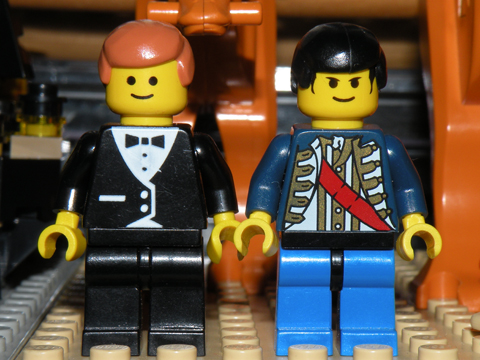