Since Paul's knee is still injured, most of us had a very quiet Saturday (with the exception of Adam, who went running with the track team in the morning and went to visit a friend in the afternoon). I spent the morning organizing computer files (I believe that all my pics are now uploaded somewhere in the cloud -- my photos have been on Flickr but now my electronic art collection, Tarot images, joke GIFs, and photos by other people are as well). I wish I could afford online Adobe stuff for automatic uploads and storage but those prices are insane.

We watched the figure skating performances by the top finishers at the US national championships -- Jason Brown's Riverdance routine marks the first time I've been really excited about skating since the 90s really (I stopped trying to figure out the ice dance rules but it looks entirely like arm-waving and contorted faces without the skating skill of Torvill and Dean or Klimova and Ponomarenko). Then we watched the SAG Awards, which made me adore Helen Mirren anew and confirmed that I need to go see Dallas Buyers Club. Lupita Nyong'o is wonderful and I love her sense of style.

Every year the Norwegian Embassy gives a huge Christmas tree to the people of the United States as a thank you for assistance during World War II. This year, in addition to the US and Norwegian flags on the tree, the embassy decided to add miniatures of Edvard Munch's "The Scream" in honor of the artist's 150th birthday, best Christmas theme ever, no? 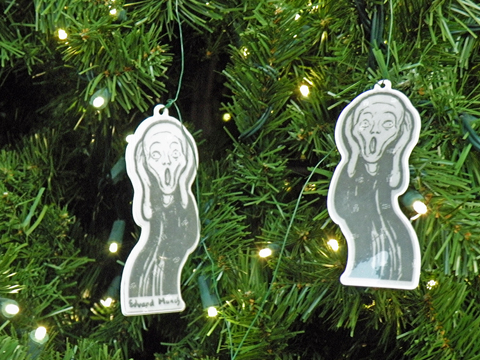