Sadly we are not having a very exciting MLK weekend, though Daniel will go back to College Park next week so we were hoping to get to some outdoor places; Paul is still having trouble putting weight on his knee, so he has done very little walking. We took Adam out to get his bike repaired, only to discover that the repairs would cost more than the bike was worth, so we ended up getting him a new bike as an early graduation present and went out for Starbucks while the pedals were being switched.

We watched the end of the Denver game and the beginning of the Seattle game but I am past my football saturation for the season. Adam had a date in the evening with his girlfriend, so I took a walk while he was getting ready, then the rest of us had dinner, saw the end of the Seattle game, and watched Requiem For a Dream, which I'd never seen despite loving Aronofsky, Burstyn, Leto, Connelly, and David. It's superb but very depressing.

Here are some photos from the exhibit at the US Postal Museum on the Inverted Jenny, the misprinted sheet of stamps on which the planes appear upside down; they are now worth between $600,000 and a million each. The post office is re-releasing the 24-cent stamp this year as a $2.00 stamp. The block of four below sold for nearly $3 million. 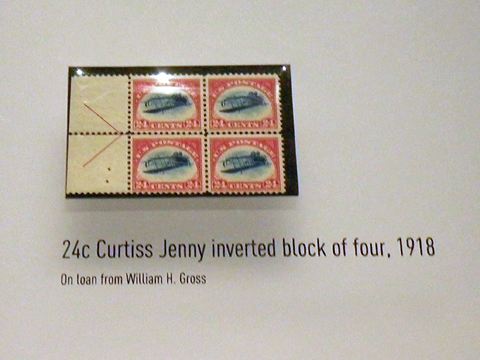