My Thursday started with an early trip to Adam's orthodontist, who -- along with my dentist and the rest of the professionals in the practice -- moved out of the soon-to-be-demolished White Flint Mall to an office a few minutes away, whose parking lot had not been fully plowed (and I was stuck behind a schoolbus streaming snow off its top driving there, which practically blinded me), But the new office is very nice and everything smells brand new. Adam only missed a few minutes of school since there was a two-hour delay, though since it was the first day of the new semester, he had to go to the guidance office just to get a schedule.

Daniel had his last full day of winter vacation, so he slept late -- on Friday he has a meeting at school, and he goes back for the semester on Saturday -- and after I picked up Adam at the end of his school day, we all went out for frozen yogurt. Adam already has homework (and can't afford to be a slacker until all his college acceptances arrive, as I keep warning him) so we had a quiet evening catching up on The Graham Norton Show (the one with Daniel Radcliffe and Andrew Lloyd Webber, the one with Lady Gaga and Jude Law). From Frederick Museums by Candlelight, the Frederick County Society of Model Engineers 2013 holiday show: 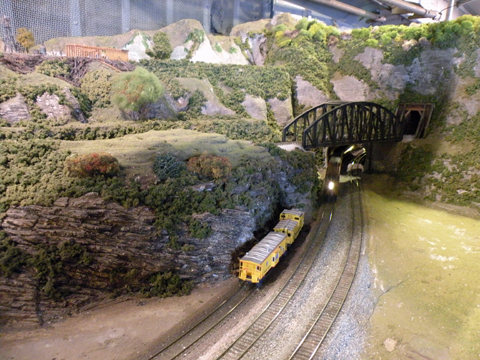