I spent most of the morning and half the afternoon cleaning, by which I mean attacking the piles of paper that have wound up on our dining room table for, oh, ten years. And if you came over today, it would not really look different from yesterday, even though I threw out half a recycling bin's worth of stuff (did you know I had six copies of the entire issue of the Hanover Evening Sun with my photo of my in-laws' late beagle? Neither did I). And I can only attack "my" half of the table; Paul's half has HIS crap. I only got out to walk (it was only a couple of degrees below freezing!) and to pick up Adam from track.

Plus I watched some of the advance Super Bowl ads (yay, puppies, Clydesdales, and Noah) and seethed that we consider a 20-year-old too young to buy alcohol or rent cars but not too young to put to death, and that my representative voted with the Republicans to cut food stamps. Elementary was great tonight -- archaeology, dinosaurs, Martin Luther, Jane Alexander, and lots of relationship stuff, plus I had to watch the last Eddington DS9 episode to review. Here are some photos from Winterthur at Yuletide, mostly not big holiday pieces but the rooms decorated as they would have been in wintertime: 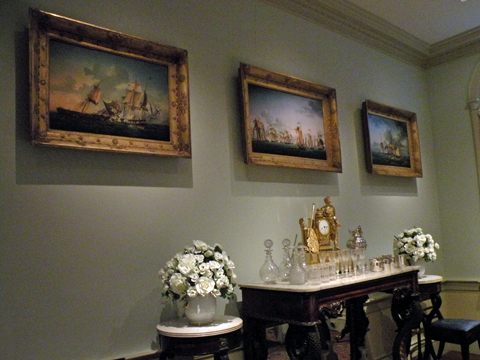 Happy Lunar New Year if you celebrate! I am a Horse, so this is my year!
Collapse