Another late night, we went to my friends' annual Super Bowl party with my kids and parents then took Daniel back to College Park after dropping my parents and Adam off at respective homes. It was a quiet day earlier -- nice weather, nearly 60 degrees though we're supposed to get snow again tonight and the groundhog saw his shadow. I didn't do much for Imbolc; I read articles about the world's most famous children's author wanting people to keep paying attention to her characters even though she's no longer writing the books, articles about a man with an Oscar and three young children who could afford treatment yet chose a needle instead, and articles about a man who molested his daughter yet whose industry cronies continue to insist that no one should believe the testimony of the victim.

We picked up my parents and went to the party, where I ate some pasta salad, a piece of a footlong veggie cheese sub, some Greek cheese triangles, half a brownie, and several chocolate pretzels. Everyone is required to place a $1 bet on the game; I bet on Denver, which proved to be a mistake, though I didn't much care who won, since I like both teams. Two mutual friends from high school were there, as well as my host's father, whom I've known since childhood, and several people we've met over the years at the annual parties. I thought Bruno Mars was more entertaining than the Red Hot Chili Peppers though I generally like the music of the latter better. Here is the annual shoe photo, plus the cat and the dogs: 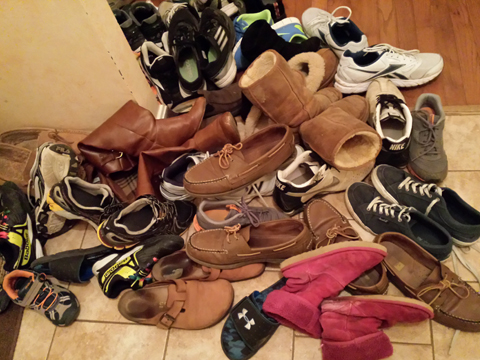