We had 2-5 inches of snow forecast for Monday, but stayed just below the snow line, so while my in-laws in Pennsylvania got half a foot and my friends in Baltimore and Frederick got several inches, we had temperatures just above freezing and rain all day. I worked and did laundry and watched the Super Bowl commercials I missed during bathroom breaks on Sunday (Hiddleston/Strong/Kingsley British villains hahahaha) and only went out to pick up Adam from school after track practice. The cats were happy because Paul worked from home, though there was a great deal of activity causing them distress just outside the back windows: 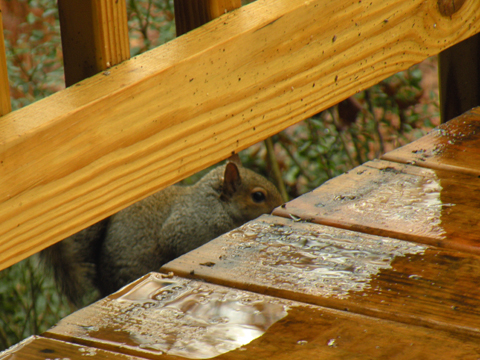 The TV was on most of the evening but I was distracted trying to get things done: I'd fail a quiz on the details of Almost Human's plot and I wasn't engaged enough to care about the Big Thing That Wasn't Even a Surprise on Beauty and the Beast (which is sure to be canceled after this season, according to Zap2It, and I think my biggest regret is that it wasn't canceled after last season so it could be one of those shows I remember with great fondness as ending too soon instead of one I remember as running out of steam). Then we caught up on Downton...I'm not sorry I watched the Super Bowl denouement, such as it was, instead. I wish someone would do a Granny and Isobel highlight reel!
Collapse