We have been warned to expect MASSIVE DOOM in the form of six to ninety-three inches of snow starting on Wednesday evening, so I made sure to get out on Tuesday after a late night/early morning trying to figure out Daniel's housing situation for next year -- he wants to stay in the same complex (indeed, in the same apartment) but one of his roommates is graduating and another is planning to live at home to save money, so he was debating between sharing a double with the third roommate or inviting in a new person and taking a chance on a fourth he doesn't know. Once that was all figured out, I went to Tara Thai with

vertigo66 (exactly two months after my birthday, but that wasn't her fault -- December was a tough month for me), and walked around the lake.

Tara Thai is conveniently situated near Target, which was only slightly crazy with people doing pre-snow emergency shopping and grabbing Valentine candy before they couldn't get out to buy it, so I was able to get various things we can't live without in a winter storm and to use my Charming Charlie Valentine's day gift card before it expired. The neighborhood bunnies must know that snow is coming because I saw three of them all munching together on the same patch of grass when I got home. Since there was pairs skating on (and I'd managed not to find out the results), we watched the Olympics after dinner, though NBC was more obsessed with Bob Costas' eye infection and the slushy Sochi halfpipe -- hey, they can have our snow! A few more Chinese New Year pics: 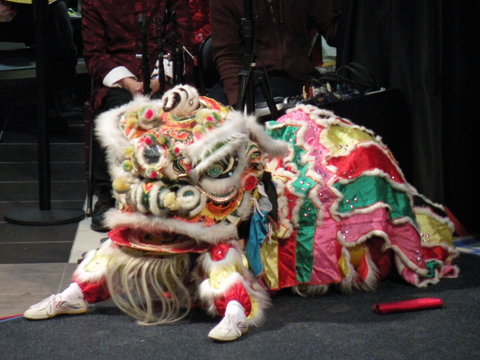