The storm that headed north to add to New England's woes dropped snow on us for several hours this morning, but the temperature was above freezing, so thankfully none of it stuck to the roads, sidewalks, or cars. We were about to go to Brookside Gardens to see the spring display in the conservatory, but we weren't sure the county parks were open, so instead we did some necessary shopping -- the food store, Staples, and the specialty shoe store where Adam gets his track shoes, where I checked out the bargain room and found the most awesome athletic shoes I have ever owned. We also took advantage of post-Valentines half-price-candy sales. 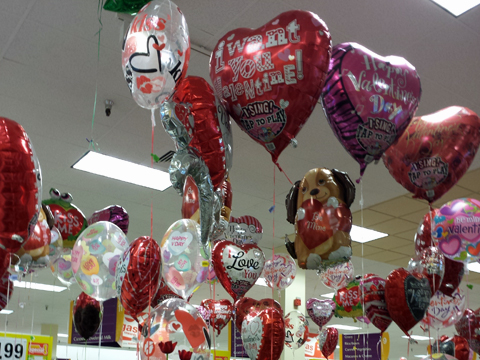 We'd watched the US-Russia hockey game in the morning as well as the men's skeleton, and the final ACC basketball game for Maryland at Duke ended with a heartbreaking two point shortfall for the Terrapins. So since we knew the Olympics in prime time would be reruns from earlier and Adam was out ice skating with friends, we decided to watch The Way Back. It's not a happy movie and definitely not my favorite Peter Weir film, but the acting is terrific and so is the cinematography (and Weir kindly kept all the inevitable animal-killing off camera). Now I am ready to see Colin Farrell in Winter's Tale, which it sounds like needs its fans to rally.
Collapse