My Wednesday was as unexciting as my Tuesday except there was Olympic skating on, so while I was getting stuff done, I was also watching the women's short program, which seemed a lot cleaner than the men's though maybe that's because so few women were trying triple axels whereas lots of men were falling not only on that jump but on quads as well. Paul worked from home, so we were watching together and had lunch together while we were doing stuff on our computers.

Adam stayed in the gym at school till nearly 5 p.m. since he can't go tomorrow -- he is taking his driving test, so you know where I will be allllllll afternoon -- while I took a walk (bunnies still hiding because of all the snow though the squirrels were very active). Since we'd seen the skating and I never want to see Bode Miller do anything, in the evening we caught up on Downton Abbey (meh except Maggie) and Beauty and the Beast (why am I still watching ugggghhhh). The neighborhood: 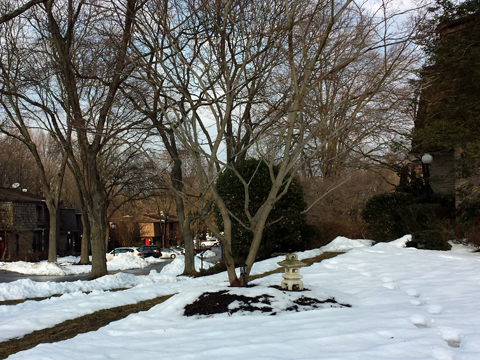