It snowed all morning. (Yes, I did just copy and paste that from my post from yesterday.) Again, school was not delayed, though we got an inch and a half on the ground and there was a five-car accident in front of son's high school as wheels went skidding. Because it's much colder, the snow stuck to the sidewalks and in our neighborhood, making it difficult to take a walk since it's hard to see the ice patches on the road. (At least one bunny was unfazed, nibbling what grass it could find through the snow.)

Paul worked from home to avoid driving in the snow after getting Adam to school, so we had lunch together when not on our respective computers around the corner from each other. He had found a tofurkey roast on sale, so we had a big dinner, which pleased Adam. Then we watched a show about Irish wildlife and the end of Captain America before the season premiere of The Americans, which remains as ulcer-inducing, well-written and well-acted as ever. Great Falls, Virginia in snow: 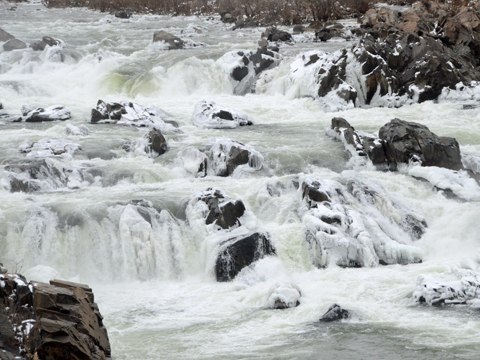