We had a fairly unexciting Saturday until evening. While Adam went to track practice, Paul and I did a bunch of cleaning and organizing; the living room table is finally visible again and we've dumped two years' worth of magazines, though I saved the EWs since I didn't have time to go through all them looking for the ones with articles on movies I like. Then we had lunch, stopped at the bank, and went shopping for Oscar food -- dinner must be eaten in front of the TV, heh.

We ate dinner early so that we could go see the 25th anniversary Blast show at Adam's school -- several of his friends were in it, including Daniel Wigle whom we've known since elementary school, and the music was pretty enjoyable -- the two girls singing "Son of a Preacher Man" knocked it out of the park, and the Spice Girls and U2 performances were quite enjoyable, plus the guy playing the guitar solo on "Stairway To Heaven" was terrific and there were two Lady Gaga songs. 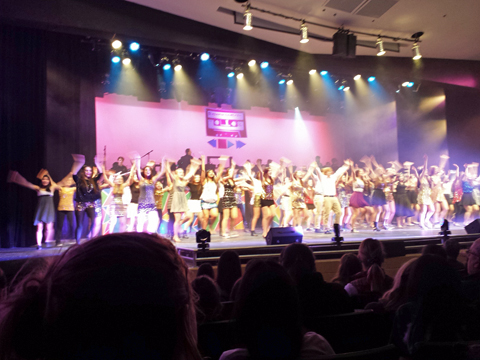