It was spring snowflakes, not autumn snowflakes, but man, we have had enough of them! Our original forecast was for 3-6 inches of snow; our total was closer to 8. I am not really complaining because I had everyone home for an extra day, though Adam was in and out (lunch out with a friend who then came over for a while between bouts of shoveling, dessert out with another friend) and Daniel slept late. Paul worked from home and somehow Fight Club came up for discussion (undoubtedly something Daniel saw on the internet), so since none of us had ever managed to see it, we put it on Cinemax. I always knew it would not be my type of movie (way too violent) and I've been spoiled for it for a decade and a half, so I was not awed though the acting was excellent, but I'm not sorry I saw it.

I strung a bunch of beads and made a bunch of bracelets while watching, so at least I feel like I was moderately creative in the afternoon. Paul made soda bread and veggie Irish stew for dinner, which was the extent of Erin go Bragh-ing we managed on a St. Patrick's Day that was more white than green -- well, that and watching the Celtic Woman and Judy Collins concerts on PBS (I must have that new Collins song about the new moon over the Hudson -- why is the CD not out yet! Oh, it's out tomorrow) with Dallas sandwiched in between (Southfork wedding! Bobby cranky! Sue Ellen drinking! Ray! Lucy! Afton! It was like the late '70s all over again!). Here are what I really hope will be the last snow photos of this winter, including some squirrels, Adam shoveling, neighbors playing, and Sunday night's storm: 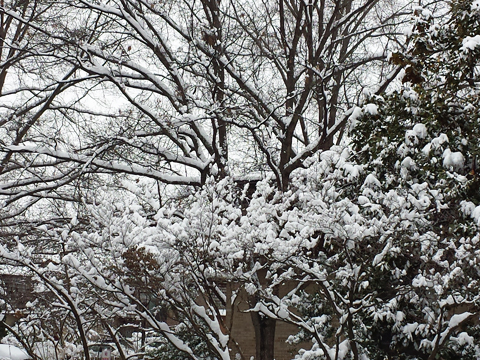 I have some thoughts on what's going on in Russia/Ukraine/Crimea but I've been a little nervous about posting them in a blog that's mirrored on LiveJournal, which is owned by a Russian company that has ties to the Russian government. I've also been a little afraid that LiveJournal could disappear entirely if things get tense between the US and Russia or if Russian bloggers on LiveJournal stir up trouble for certain heavy-handed Russian leaders. So I thought this Washington Post column, "The logic of Russian Internet censorship," was interesting, asking whether Obama could order the servers left running in the US if their Russian owners tried to shut them down.
Collapse