I had a bunch of work to get done in the morning, which it's fortunate that I actually got done because my father came to take Daniel out to lunch and invited me to come along (perhaps because Daniel was barely awake). We went to the Original Pancake House, where I had continental crepes with orange liqueur and we discussed the elusiveness of world peace and the difficulties of finding summer internships. Then Daniel and I came home, where I had laundry to fold, so -- since he had never seen the movie and that's excuse enough -- I put on Real Steel, which, I'm afraid, has not yet gotten old -- when is that sequel getting made?

Paul came home while I was finishing up my jewelry-embellishing project from my snow day -- which in this case involved affixing orange and black swarovski crystals to a Baltimore Orioles charm bracelet -- and made Indian food for dinner. Adam was busy writing a monologue in blank verse for English class, but the rest of us watched Marvel's big commercial for itself, Assembling a Universe, which was fun and had Tom Hiddleston and other lovely guests, yet has not convinced me that Agents of SHIELD is contributing anything crucial. Here are some photos of evidence of beavers on Olmsted Island in the middle of Great Falls: 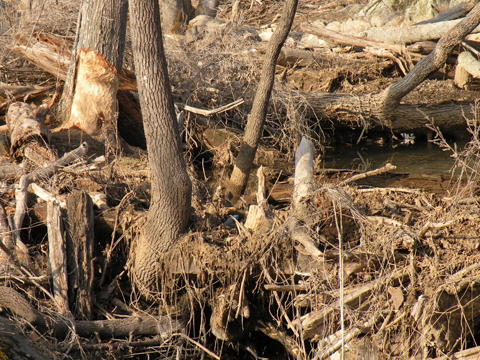