Daniel and I had a relatively quiet Wednesday, though we did go out for bagels and I dragged him to A.C. Moore which did not even have the beads I needed. He was working on summer job stuff -- he has a phone interview for one tomorrow -- and I had assorted work that needed to be done, though some of it was mindless enough that in the afternoon we watched The Prestige together (one of those movies that gets better when you know the twists and can go back and see how they're projected, plus Bale and Jackman are brilliant in it).

Adam stayed late at school with the track team after delivering a kick-ass monologue for AP English, so it was nearly dinnertime before I saw him. After we ate, we watched the first episode of The 100 (which a couple of reviewers liked) to see whether it was any good -- it had some decent moments swiped from other sci-fi and the more impressive Terra Nova, but I was not really sold. The Americans remains a nail-biter. Here are some photos from sightseeing and shopping along the water in Ellicott City last weekend: 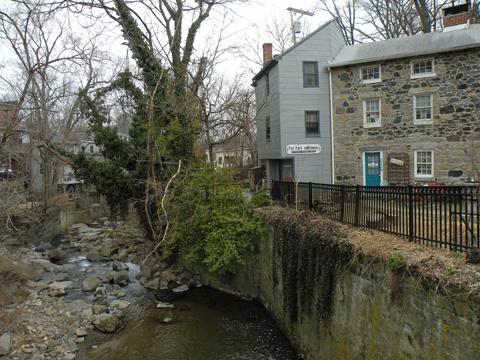