The Orchid Flower
By Sam Hamill

Just as I wonder
whether it's going to die,
the orchid blossoms

and I can't explain why it
moves my heart, why such pleasure

comes from one small bud
on a long spindly stem, one
blood red gold flower

opening at mid-summer,
tiny, perfect in its hour.

pistil and stamen, pollen,
dew of the world, a spoonful

drama in those old sunrise
prisms in wet cedar boughs,

deepest mystery
in washing evening dishes
or teasing my wife,

who grows, yes, more beautiful
because one of us will die.

It wasn't as warm on Friday as initially forecast, but it was still quite nice out, and we're finally seeing crocuses and daffodils pushing up all over the neighborhood, though we are also being threatened with snow on Tuesday morning, argh. I wrote a review of Deep Space Nine's "Behind the Lines", which I once listed among my very least favorite episodes though it's quite well done; it's painful for me to watch some of the things the characters do to one another, though less so now that I can see the full picture from the finale on back. Adam saw The Grand Budapest Hotel and reports that it is exquisite.

Paul worked from home so he could watch March Madness in between phone conferences and computer work (both my kids are actually paying attention to the tournament, which is unusual). No one here cried when Duke lost, though we feel badly for our local teams, AU and GW. We had Greek food for dinner with my parents, who also had the games on, so by the time we got home I was in the mood for the sequel to last night's movie, Elizabeth: The Golden Age with

dementordelta. (Liz's Xena-Aragorn moment still rocks.) Some orchids from the Orchid Symphony display at the US Botanic Garden: 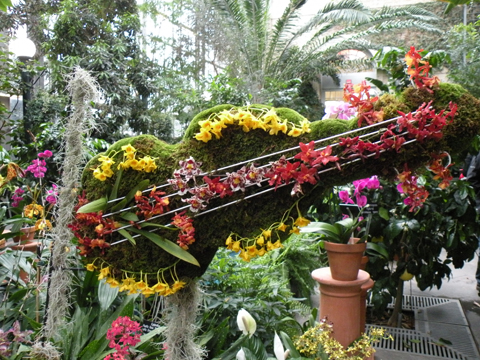