Remember how I promised not to post any more snow pictures this spring? I LIED. We had snow that started before I was out of bed and fell until after dark. Since the temperature hovered right around freezing, it didn't stick to the roads, but we got over two inches on the deck and the grass, and at times we had great big white flakes falling all over the neighborhood flowers that have been trying to come up for weeks. Adam was disappointed that school was not canceled or delayed, but having his track meet called off meant that he had more time to get things done after school. I went for a walk in the morning and another in the afternoon: 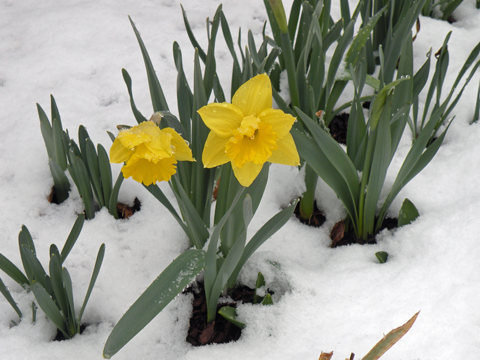 Paul worked from home to avoid having to drive in the white stuff. In the afternoon, when we had both finished our work and I still had laundry to fold, we watched American Psycho since neither of us had ever seen it -- I have always avoided it, I was afraid it would turn me off to Christian Bale forever, but it only seemed very slightly beyond Wolf of Wall Street, like this was the next logical step. Evening involved watching the Maryland women advance, catching up on Once Upon a Time, and watching Hugh Jackman judge an X-Men tattoo competition on a reality show I will never watch again!
Collapse