It was clear but cold on Wednesday, meaning that there is still snow on the ground, but the big news here is that Adam has passed his driving test and now has a Maryland drivers license! (Which of course he took advantage of pretty much as soon as we got home from the MVA, driving to Starbucks without us.) The wait was only moderate and everyone we talked to at the MVA was friendly for a change except they told me to move the car from the test lane after he passed the test, then didn't want to let me back in the building because they had technically closed five minutes earlier, d'oh.

We watched the second episode of The 100, which is mediocre and derivative in most ways, but the three smartest characters are all women (possibly the four smartest, it's hard to tell about one of the girls), so much is forgiven. Then we watched The Americans, where I spent the whole episode worrying one woman was going to kill another woman (I still think that ultimately that's the likely endgame -- that or the woman's husband -- which is upsetting). Here are a few more photos of what really had better be the last snowstorm of the spring, plus one from this afternoon when it was melting! 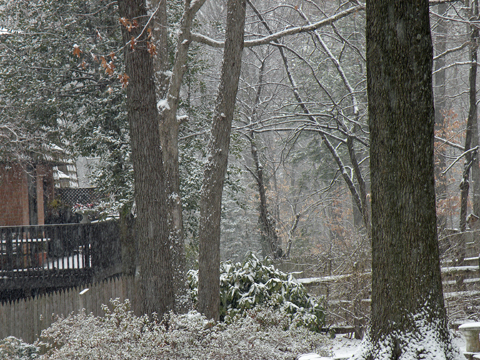