We spent nearly all day Friday at the University of Maryland, which was having an open house (well, an open campus) for admitted students yesterday and today. Many of Adam's friends were there, and though he has announced that he is sick of college visits, he agreed to go to the business school and entrepreneurship program presentations, since he's been admitted to both and has been offered a substantial scholarship. He would really like to go to college out of state, which I understand, but I've also been impressed with Daniel's programs and he has been very happy in College Park. After the meetings, we had a late lunch with Daniel, then went out for ice cream with one of Adam's friends at the campus dairy. 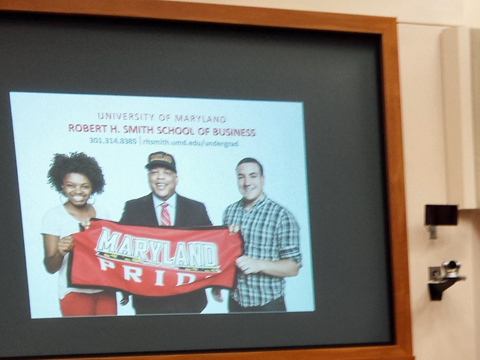 After we said farewell to Daniel and went home, I finished up a review of Deep Space Nine's excellent "Favor the Bold" (warning: I will be describing pretty much every DS9 episode from now till the end of the series as excellent) and went to see if the daffodils are open in the neighborhood yet (mostly not). We had dinner with my parents, watched some basketball (Michigan certainly tried to keep things interesting in the end; congratulations, UConn), then came home and Adam worked on scholarship applications for Michigan while we all watched a screener of The Secret Life of Walter Mitty, which was better than its reviews and had some very nice Icelandic scenery.
Collapse