Distracted because I'm watching Colin Firth on The Tonight Show (he sounds very tired, they must be sending him to an awful lot of promotions for The Railway Man; also, he was loads better looking with laugh lines around his eyes rather than whatever he's had done to erase them). I spent the day celebrating Russell Crowe's 50th birthday -- a man who looks awesome for his age in every way, though

dementordelta and I were watching his work from many years ago since we already saw Noah, including The Crossing in which Russell is practically a baby and The Insider which is superbly acted by everyone involved and just as relevant as ever in terms of its analysis of news organizations.

We also went out so Delta could give some Star Wars standees to a local friend and to pick up Indian food for lunch, which we ate, along with chocolate pie, after a few episodes of Shoujo Cosette, which despite the puppies and butterflies is rapidly becoming one of my favorite adaptations of Les Miserables. After we caught up on the episode of Once Upon a Time we missed on Sunday, she had to go home, so I had dinner, watched this week's Dallas (oh, Bobby, give Sue Ellen a break!), and saw UConn win the NCAA tournament, which pleases my in-laws greatly. Here are some more photos from the Downton Abbey costume exhibit at Winterthur, including Lady Edith's wedding dress and Sybil's harem pants: 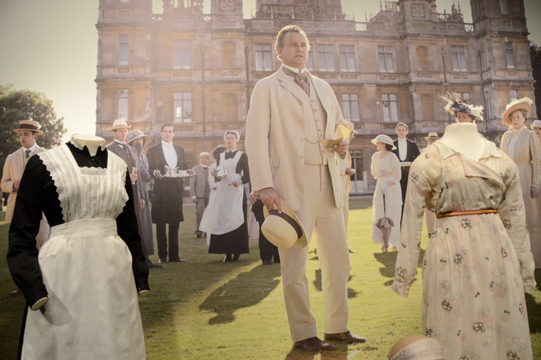