We are supposed to have four straight days of rain, which began on Monday afternoon. Our car was in getting routine service, so Paul worked from home, we had lunch together, I finished some work and started laundry and made a bracelet with little ceramic sea turtle beads I got on sale at Michaels. After we picked up the car, I sent Paul home, went to the mall, and bought myself a present, a second pair of prescription bifocals; the ones I got last week, which are for the computer and reading, are so awesome that I realized there was no reason apart from lack of full insurance coverage to pay that I couldn't get another pair with my distance prescription that will also allow me to read my phone screen, price tags, etc.

Paul has been in the mood to make French onion soup for a week, so he did, for dinner, along with faux chicken coq au vin, causing Adam to ask whether it was the anniversary of the day Jean Valjean lost the French Revolution or something. He disappeared after dinner to do homework, while Paul and I watched Star-Crossed (which I am sort of enjoying but supposedly it's going to be canceled) and Warehouse 13 (which I've heard is definitely ending this season, so I will miss it but they're obviously running out of artifact ideas and I'd rather it end while it's still so enjoyable). I love Essie Davis on Miss Fisher's Murder Mysteries but the plots never fully grab me. Green Spring Gardens flowers and turtles: 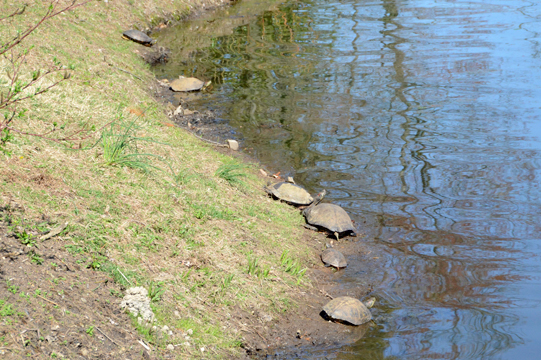