Adam had work at Hebrew school in the morning and needed to study for AP exams in the afternoon -- an activity so exciting to him that he took some down time working in the neighbor's yard to relax -- so since we knew he would be busy most of the day, we went downtown early to the National Arboretum to see the thousands of azaleas which are at peak bloom this weekend. It was absolutely gorgeous, not only among the azaleas but walking among the National Capitol Columns and in the herb garden, plus there was a bonsai festival with trees on display and Japanese art for sale, and there were frogs and turtles in the ponds: 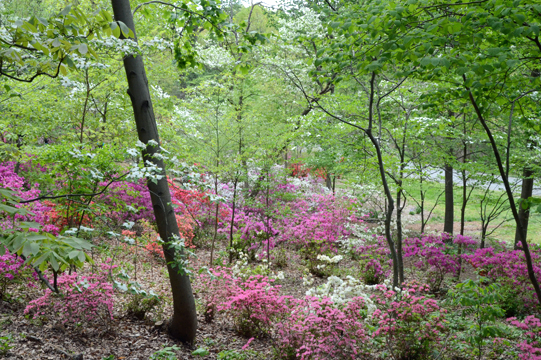 We got home relatively early in the afternoon, just as the arboretum was starting to get really crowded, so we had time to do assorted chores and enjoy our own azaleas which are also at peak bloom...we had a bunny in our backyard right behind the house beneath the purple azalea bush. Since it was Star Wars Day, Paul made Boba Fettucini Alfredo and TIE fighter sausages for dinner, plus Wookie Cookies which we ate while watching Once Upon a Time (pretty meh despite plenty of Regina until the very end, when things got interesting again) and Cosmos (great as always, as was John Oliver). Happy Cinco de Mayo!
Collapse