Monday was a chore day, but it was also one of those days where I looked at the clock at 6 p.m. and had no idea where the hours had gone. Adam got to go into school late because he had the psychology A.P. exam and was excused from classes before it, so I got to have breakfast with him; then I did two loads of laundry, one of which is still not folded because I went out to the bank and CVS (where I ran into my mother, so we chatted for a while). When I got home, I got a package with a little chandelier lamp to match the one I got two weeks ago, so I rearranged the clutter around my computer a.k.a. the Fannish Corner of Squee.

Paul made enchilada casserole for dinner for Cinco de Mayo, then we watched Star-Crossed and Warehouse 13 (I hear the former is going to be canceled, which is too bad because it has a lot of women of varying ages in interesting positions, particularly among the Atrians, and I know this is the last season for the latter, so all I care about is that Pete and Myka end up together in the end, because although the artifacts are getting silly - Harvey Korman's cufflinks? - the shipping remains the same). Now my cat is giving me the sleepy glare of doom, so here are some photos from the National Arboretum's azaleas and pond life: 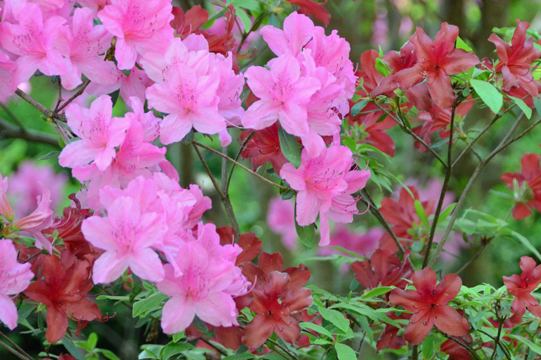