I am behind but I had a very nice Wednesday -- I met two of my oldest friends for lunch, the one whom I've known since first grade who hosts the Super Bowl Party we go to every year and a mutual friend from high school who now lives in her neighborhood. We spent more than two hours at Founding Farmers talking and sharing fried green tomatoes (appetizers) and beignets (dessert) with main courses in between. Every year near the Super Bowl we say we must all get together and every year it takes months for us all to pick a day (in fact a fourth friend was supposed to join us but she is starting a new job), but we must do this more often!

I had a whole bunch of chores to do when I got home, which ate up what was left of the afternoon and part of the evening, though I did get out to walk for long enough to see the three baby bunnies who live in our neighbors' backyard and apparently have realized they must hide from dogs but not necessarily people. Adam was pretty fried from having the calculus and Chinese AP exams on Wednesday and the English AP exam to prepare for on Thursday. Paul and I watched "The 100," still my favorite show on the CW, and "The Americans," still the show that makes me bite my nails the most. Bees at the National Arboretum: 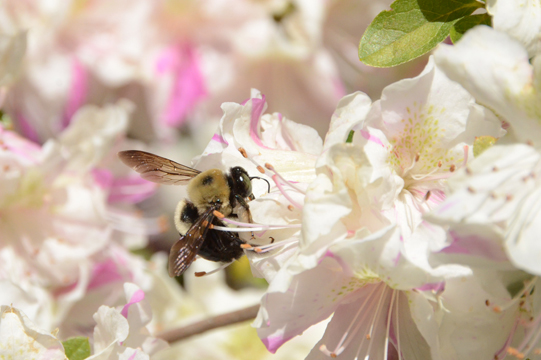