Quickie since we have been watching the Jackman-Fassbender-McAvoy Graham Norton Show, which is hilarious, and now we are watching Saturday Night Live, which is mediocre at best. Adam had a track meet in the morning, then we took him to Home Depot and Target to get parts for a camera project and a birthday present for a friend. While Nashville was getting renewed and Michael Sam was becoming the first gay man drafted into the NFL, we stopped at Lake Whetstone, where it was drizzling but we saw herons, ducks, and many geese and goslings: 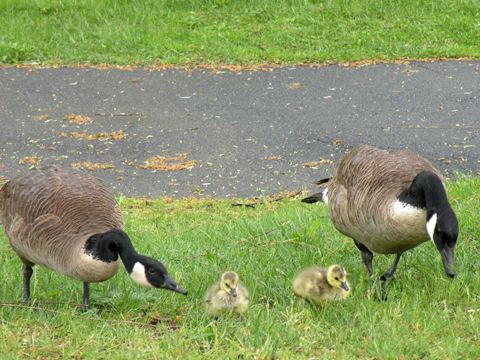 Adam went out to dinner with a group of friends for his girlfriend's birthday while Paul and I came home, took a walk around the neighborhood to see the baby bunnies, chatted with neighbors, ate twice-baked potatoes, and watched X-Men: The Last Stand with

dementordelta since we all wanted to see it again before Days of Future Past (I watched the NYC premiere livestream, too). I hadn't realized X3 had so many deleted scenes on the disc, including one which leads right into The Wolverine.

Happy Mother's Day if you are a mother, have a mother, or love someone like a mother!
Collapse