I had a bunch of work and chores to do Tuesday morning, including laundry that isn't completely folded yet. It was over 90 degrees and I feel like I never quite woke up properly. Even the bunnies were a bit sluggish -- I only saw two of the babies and the mother rabbit didn't bother to hop away when I took her picture. After school, I went with my mother and son to pick up the latter's prom tuxedo, which he looks very nice in but I have been forbidden to share photos until prom night. Then we stopped at Dick's Sporting Goods to get a weight for him to use to build a steadicam for an English project.

We watched the season finale of Agents of SHIELD, which had some nice moments for Coulson but I am still extremely fed up with the way the women are written (Awesome Woman's biggest point of anger vis a vis Traitor Asshole is supposed to be that she SLEPT with him? Not, you know, all the PEOPLE HE KILLED?) and I have to admit that I'm looking forward to the new Peggy Carter show so much more than this one returning. Then we caught up on the Once Upon a Time season finale, which had some lovely moments (Back to the Future and Star Wars jokes FTW). Lake Whetstone goslings and parents from Saturday: 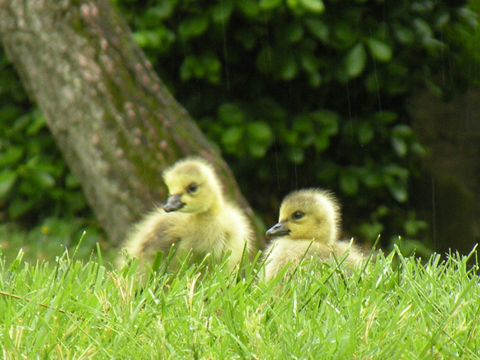