Wednesday was another annoying chore day. After calling twice to find out whether my new glasses were ready, I decided I should march over and find out for myself. Sadly, they were not ready, but I believe my presence operated as a kick in the butt because they promised me that I would have them by the end of the day. I went to get some other things done at the mall and ended up meeting my mother, though I'd eaten breakfast late, so we skipped lunch. Then I went to get my hair cut, stopped to get conditioner in the hope that it would make my newly cut hair look more voluminous, and received a phone call just as I was leaving from Adam, who had forgotten his key and needed to be let in the house.

When I got home, I helped Adam record sound effects for the movie version of Waiting for Godot he and classmates are making as a final AP Literature project, did more laundry (including the skirt I wore today, which a bird bombed as I was leaving Sears) though I hadn't folded Tuesday's laundry yet, and rearranged some stuff in my room to make space for a new lamp. After dinner, Adam went to work on his final school projects while we watched Nature on beavers and dams, The 100 on which all the well-developed characters are women, and Nashville so no one could spoil me for the season finale even though it meant postpone The Americans for a day. Brookside Gardens azaleas on Mother's Day: 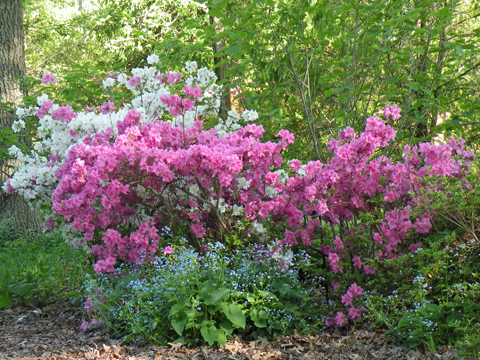