Adam played tennis with my father in the morning while Daniel slept in and I did chores; then Adam went to a friend's graduation party while we had lunch with Daniel and took him to Great Falls. The weather was magnificent and the water was still pretty high from last week's storms. We saw lots of animals -- geese with goslings, three little red skinks, two big black snakes, several turtles, at least a dozen great blue herons in the sky and sharing the big rocks in the middle of the river: 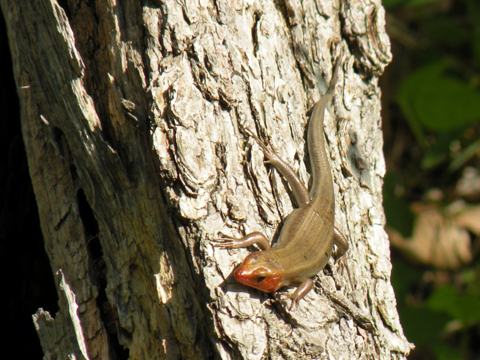 Paul smashed the passenger side mirror of our minivan while trying to pass another van, so we tried to find a dealership that could replace it before graduation on Tuesday (not anywhere in our county). Our neighbors for whom Adam does yard work invited us to their barbecue; we had dinner there and hung out with other neighbors. Then we came home to watch The Lego Movie, which remains awesome, on VOD with Daniel Wigle, plus we caught up on The Colbert Report with Patrick Stewart.
Collapse