dementordelta drove up Monday morning to go with my family and several of younger son's friends to see X-Men: Days of Future Past. I'm not sure it was a better movie than The Wolverine or First Class, but I enjoyed it more on many levels -- I loved the crossover cast, the visual humor, all the reunions, the inside jokes from the '60s-'70s including the use of music and TV ( Collapse ), the gratuitous butt shot, the Charles-and-Erik saga. I loved Mystique though I wished her friends would have considered that maybe her total isolation from other women, given the movie's near-Bechdel fail, might have contributed to her unreachability -- still, lots to enjoy, and only a couple of minor performances that fell flat for me. It was a fairly full and enthusiastic theater crowd, and afterward we peeked out to see the goslings and heron in the lake.

Younger son went with his friends to play frisbee, then to a graduation party, so the rest of us came home and took a walk to see the neighborhood bunnies, then watched A Dangerous Method because we were in the mood for Michael Fassbender and the entire cast of that movie is terrific. Eventually

apaulled took older son back to College Park to start his summer job, then

dementordelta drove home, and when

apaulled got back, we watched The Normal Heart, which is phenomenally acted and heartbreaking, regardless of how you feel about Larry Kramer or straight actors playing gay characters or whatever else tumblr is upset about. I haven't read the play since grad school and it seems to me that the political fury been toned down somewhat -- no one gives any credence to the AIDS-as-CIA-conspiracy theory -- but the horror of the sickness and death remains. 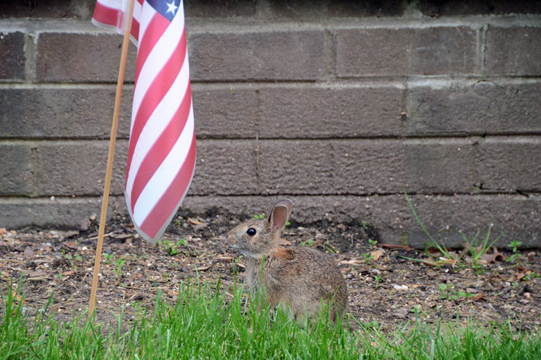