Daniel wanted to sleep late on his day off, so we left him and went to meet Angela and Kevin plus her mother at the Washington Folk Festival at Glen Echo Park. It was wonderful as always -- we went to see Ocean Orchestra, which always opens Sunday morning on the Potomac Palisades Stage, then we visited the craft display in the Bumper Car Pavilion, ate lunch in the picnic area, and stopped on the way to go retrieve Daniel to say hi to some friends and because Laura Baron's singing was so gorgeous: 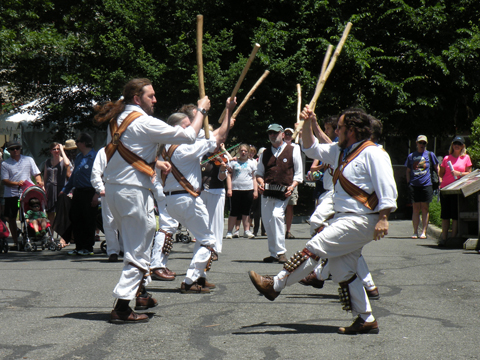 We had to get home early enough in the afternoon for Daniel to get some time behind the wheel; he is coming home from College Park on the weekends this summer so he can get his driver's license before he graduates from college. Then we caught the end of the Orioles game, which they won partly because Machado hit a grand slam, had dinner, and took Daniel food shopping before dropping him off at his apartment. Adam reports that they spent all day at the beach in Rehoboth and barbecued for dinner!
Collapse