The 30th anniversary of my high school graduation (something I would have forgotten about had a fellow classmate not reminded me on Facebook) was another day without any major excitement to report, apart from a sale at AC Moore, which I visited to get split rings and lobster claw clasps to add to the $1 bead bracelets I bought at the folk festival last weekend, but left with two $2 quartz bracelets, two $2.50 sparkly velvet-look scarves, and two $1 red large-hole beads for my in-progress Maryland Terrapins add-a-bead bracelet. That shopping and playing with the jewelry constituted my fun for the day.

I did get to chat with neighbors and to see bunnies, chipmunks, and a deer all running around crazy in the neighborhood, which it turns out they were doing because a storm was coming...in fact, it was drizzling before I got home from walking. We watched the first half of The 100's season finale, which was great -- sure, the dialogue is crap and the science is questionable, but the characters are good and the show passes the Bechdel Test with flying colors. Here are some photos from the Brighton Dam Azalea Garden, which we visited early last month on the way home from the Sheep and Wool Festival: 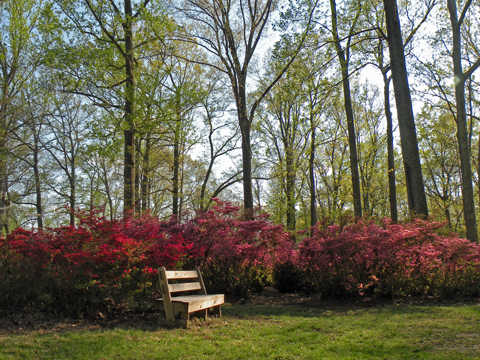