Quickie because I have been watching the Tonys with Paul and Cheryl (high points: Hugh Jackman bouncing, dancing, rapping, singing to the nominees, and explaining about his butt double; NPH performing, winning, and thanking people; Mark Rylance giving an exceptional Tonys speech; everything about the Best Musical from the performers to the score; Ramin and Will in Les Mis, though I am disappointed that Hugh did not make a single Les Mis remark (and the absence of an Adele Dazeem comment is a loss for pop culture); and Clint Eastwood talking to a chair).

Earlier in the day, though both kids wanted to do their own thing with friends, we went to A Shared Universe: The Art of Comic Books exhibit at Strathmore, which was also having a Sounds of Brazil festival with live music, dance, carnival performers, and food. Here are a few photos from the latter, with more tomorrow! 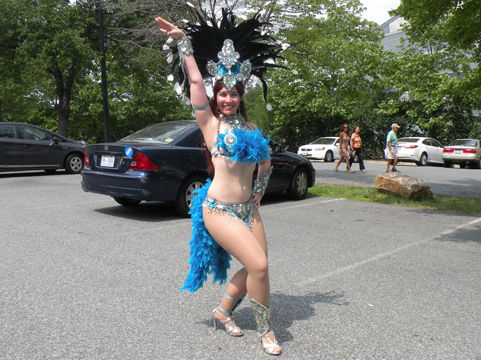