I spent a rainy Friday the 13th morning working on things like a review of Deep Space Nine's plays-better-than-its-script "Honor Among Thieves", one of many excellent Colm Meaney performances, so that after lunch we could go retrieve Daniel from College Park (meaning I got a brief look at the sheep and lambs on the campus farm and at the historic planes at the aviation museum).

After dinner with my parents, we came home and since the kids had never seen it but have seen lots of cracky Nicolas Cage performances, we watched Raising Arizona. I haven't seen it in over a decade and it is as hilarious and twisted as ever (I had forgotten the brilliance of John Goodman). Then we caught up on The Graham Norton Show and now son has the Food Network on. Some of our neighborhood squirrels: 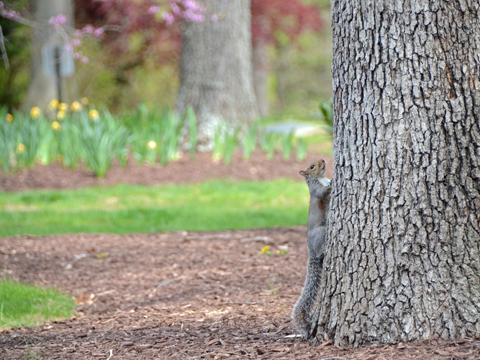