I don't have anything exciting to report from my Monday except for the same news that the rest of the U.S. is celebrating, namely that our World Cup team has managed to win one game and avoid humiliation in the eyes of the world! I am sure this will distract everyone from the disasters unfolding in Iran/Iraq, Israel/Palestine, and wherever in Nebraska those tornadoes are touching down, plus in local news the fact that the National Zoo is planning to shut down the Invertebrate House forever in five days with no warning (and apparently may have to euthanize many animals since it's too sudden to find homes for all of them).

It was grotesquely hot and humid, in the 90s, so I mostly stayed indoors anyway -- fortunately I had leftover Thai food from Saturday night for lunch, and the laundry got done with help from cats. I did not do anything Bloomsday-specific, apart from having Irish stew for dinner; I had too much sinus pressure from the weather to risk a drink in Joyce's honor. We started watching The Escape Artist, but despite David Tennant's presence, I hated it and ended up watching an episode of Teen Wolf instead! Speaking of which, here are some pics I took after lunch with Kay at Washingtonian Lake last week: 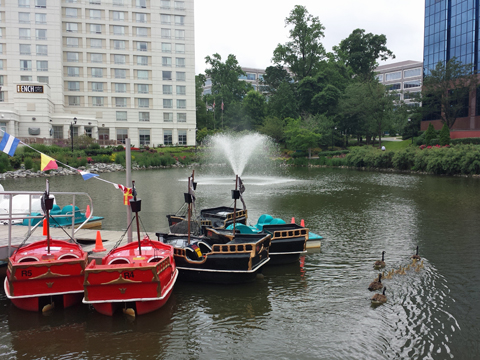