We spent the entire day, literally dawn till dusk, at the University of Maryland, where Adam was attending the Honors College orientation. We went with him to the big group meeting, then they sent the kids off to one set of panels and the parents to another, plus they fed us lunch which we ate with the mother of one of Adam's friends who is also going to be in the program in the fall. We also walked all over campus so we could see the farm, the creek, and the big central fountain. Then we met Daniel when he finished work for the day and went out for Mexican food with him, leaving Adam for the dorm sleepover which included a chance to use the rec center that has the climbing wall, a selling point for the university! 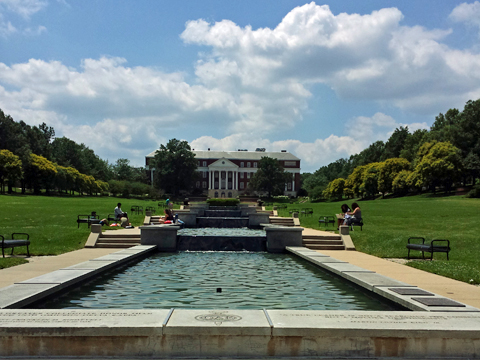 I only saw the World Cup game in bits, since guests can't get onto the university wi-fi so trying to stream ESPN on my phone ate my battery and I could only sneak out to the coffee shop so many times to watch on the big screen. If the US team could not win, at least they got lucky (more than the Nationals could say in their game against the Cubs -- the Orioles won last night in the 12th). When we got home and rescued the cats from their all-day starvation, by which we mean their dishes were still 1/3 full but the food was stale, we watched more Orphan Black -- Rachel uttered what must surely be the series' theme, "Nurture prevails." What will we do two episodes from now when we're all out and have to wait a year?
Collapse