It was my 24th anniversary, not my first, but it was still a nice day -- fairly quiet early on, getting work done, then Adam went to a World Cup party that was doubling as a birthday party for a friend, and I went for a walk (it was over 90 degrees, even the bunnies were sprawled in the shade looking overheated), When Paul came home from work, we went to downtown Rockville for dinner and the end of the US-Belgium game, which was being broadcast on an oversize screen in the town square.

The rest of my day was an equal mix of food and sports -- the US losing the game, fantastic black pepper tofu and curry at Taste of Saigon, Nadal getting thumped out of Wimbledon by a kid the same age he was when he thumped Federer, ice cream, the Orioles and Nationals both beating teams they would have had no excuse for losing to. When we got home, we watched Winter's Tale, which I still like a lot even though it has flaws as an adaptation of the book on which it's based. A few pics: 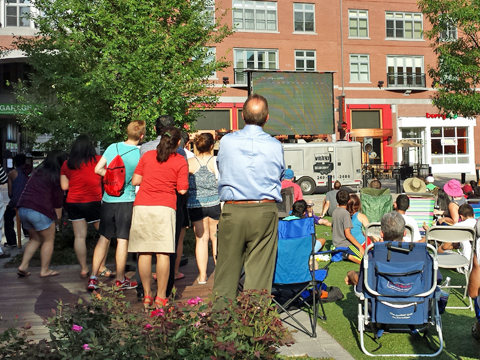