I spent Monday with

dementordelta, mostly watching movies. We were in the mood for Apollo 13 after watching Armageddon the night before, so we watched that (not an entirely accurate portrayal of the crisis but extremely well acted by a big cast of big names). Then we went to California Tortilla to get burritos for ourselves and Adam for lunch. After that, we watched The Efficiency Expert because she had never seen it and after having seen Noah, we figured we should watch the other Russell Crowe-Anthony Hopkins movie together; Russell is distinctly NOT the good guy and Hopkins is quietly charming.

Adam's girlfriend came over to say goodbye, as she is spending most of the summer visiting family in Greece, and

dementordelta and I went for a walk to see the neighborhood bunnies and had chocolate pie. We watched a few more Shoujo Cosette episodes before she left, and Paul and I watched the terrible final episode of the monumentally disappointing second season of Beauty and the Beast after dinner. My parents will not agree, but I am delighted the Orioles beat the Nationals! The other day at the National Geographic Museum, we saw both a life-size and miniature sculpture of lions by Brad Oldham called Together: 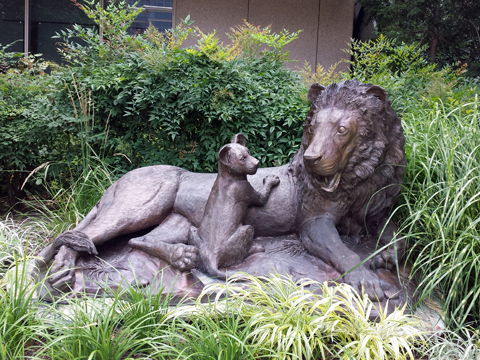