My Tuesday was all about chores, some of which were completely absurd -- I went looking for a gold pen to finish a project I started literally ten years ago (which is probably when I bought the gold pen) and spent an hour testing about fifty pens that I had in various and holders, some of which I fear may date back to college. I was gifted some vintage Renfaire jewelry that I started sorting, which led to sorting Renfaire clothes, which led to sorting clothes in closets and collecting stuff to give away. Just wait till I get to the dining room table and see what I discover, and older son has been warned that if he wants a double bed in his room here, he has to help in the sorting-and-recycling process while he's at home.

Adam went to a friend's house to watch the German soccer team goal clinic, excuse me, the World Cup game against Brazil, which was so depressing that I turned it off (I was also hoping that my rooting for Brazil was somehow causing the problem and they'd come back if I looked away, but it didn't work out). We had a massive thunderstorm around dinnertime that rained out the Orioles-Nationals game, so instead we watched Pulp Fiction, which believe it or not I had never seen before. It's still too violent for my taste but at least now I know how all those one-liners sound in context! Here are some photos from three different fields from the Battle of Monocacy anniversary - artillery, cavalry, infantry: 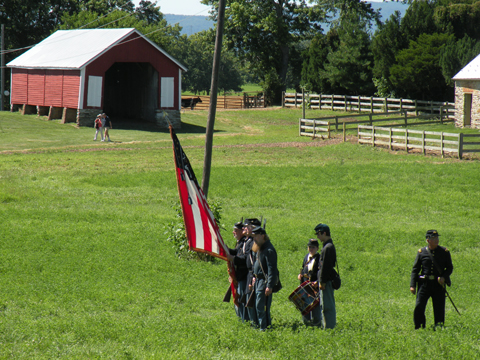