Adam decided to bike to Sugarloaf Mountain on Monday, where he met a friend who had driven there and was therefore able to take him to get Gatorade and food. Meanwhile I was in the middle of work and laundry and stuff when our power went out, which I realize is becoming a Thing. We were going to have French onion soup for le 14 juillet, but since we couldn't cook it or get Gruyere out of the refrigerator, we ended up going out instead to Adam's favorite local Chinese restaurant...without Adam, since, as we were preparing to go out, he got a better offer from friends.

Instead we went ourselves to Grand Fusion, where we had veggie satay, then Thai basil tofu and orange tofu, all of which were excellent. We took our time eating since Pepco said the power would be on at 8 p.m. at the earliest, then called home at 7:45 to hear the sweet sound of our answering machine, meaning it was getting electricity. So we returned, and, since it was still Bastille Day, watched The Man in the Iron Mask with Cheryl via the internet (not a perfect adaptation but it has a great cast and some very fun scenes). Geese at Pennyfield Lock last month: 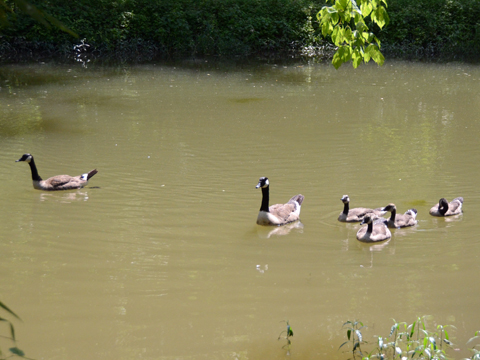