Adam had his pre-college physical exam on Tuesday morning, so we were out of the house bright and early to be at the pediatrician at 9 a.m. even though we are both behind on sleep from the weekend. His checkup went fine, he didn't need shots or anything, but I know I am still overtired, because when he drove us to his friend's house on a gravel road so they could go to Warped Tour at Merriweather Post Pavilion together, I couldn't move the van to leave and thought stones must have gotten wedged in the wheel somehow...long story short, I didn't realize that he had left the parking brake on. *facepalm* At least I got to visit with Adam's friend's mother while waiting for a tow I didn't need!

The rest of my day failed somewhat less: Adam went to the music festival with two friends, one of whom has strep throat and thought (hoped?) he was no longer contagious, and I went to World Market (which did not have the containers that I wanted after seeing them in the sale flyer) and A.C. Moore (which had everything I wanted except any phone/data signal while I was shopping). We had hot dogs and shell noodles for dinner, then watched some Diana Rigg Avengers and Last Week Tonight With John Oliver while waiting for Adam's return -- he had a great time at the concert, met I Fight Dragons. But before that, I had a banner bunny day -- seven rabbits today, plus a pair from yesterday: 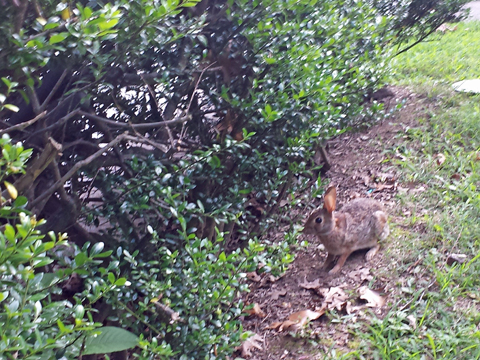