We have been meaning to visit the National Aquarium in Baltimore since Blacktip Reef opened, and on Sunday we finally got there, though Adam had plans with friends to play volleyball so we went without him. I had been afraid they were enclosing a lot of the big central ray tank, which I loved -- I could stand around it just breathing the smell of the water -- but they've actually improved it, installing a coral reef all around and through it and adding many blacktip sharks, plus dozens of other fish (even "Nemo" and "Dory" as the clownfish and blue tang were being called even by people who otherwise did not speak English).

We did not get to see the baby sloth in the rainforest area because the mom was hiding, but we did see the puffins, flying foxes, crocodiles, many turtles, and a huge variety of fish, coral, jellies, and crustaceans. We also visited the dolphins, whom the aquarium is considering releasing into an ocean holding tank instead of keeping captive marine mammals, which I favor completely. Then we walked over to the terrific Asian fusion restaurant Blu Bambu for dinner before driving Daniel back to College Park, where we took him food shopping, then coming home for Masters of Sex. Just a couple of pics of us and the reef: 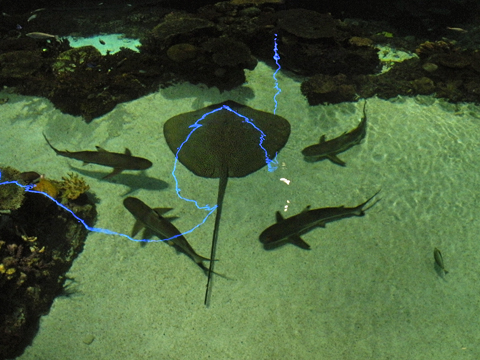