Tuesday was no more exciting around here than Monday apart from continuing magnificent weather that made me not want to do anything but take walks and see the bunnies and deer and enjoy it. I got some boring stuff done, but the only real entertainment didn't arrive till late afternoon when Amazon.com delivered my Blu-Ray of Noah, whose special features I have not had time to watch yet. Younger son was out with friends from a hike in the morning through lunch and dinner and he is still not home, so I don't even know what he was doing.

We were talking about going to see Signature's production of Sunday in the Park With George, though it's kind of expensive, so we figured we'd get the DVD of the original Broadway production out of the library and see if that inspired us one way or another, so we watched that in the evening. Mandy Patinkin and Bernadette Peters are wonderful in it, as is the supporting cast -- what a treat to see Brent Spiner singing again -- and there are many lovely, creative staging decisions in that initial presentation, plus a lot of visual humor.

The Orioles won! And speaking of Baltimore, here are some photos from the National Aquarium's relatively new Blacktip Reef, which replaced the big shark-and-ray exhibit in the central main floor tank; in addition to blacktip sharks, the beautiful (though hard to photograph because of lighting) reef has rays, puffers, wrasses, unicornfish, a three-flippered sea turtle, even Dory and Nemo (which are apparently now the scientific names of blue tangs and clownfish even among kids who don't otherwise speak English): 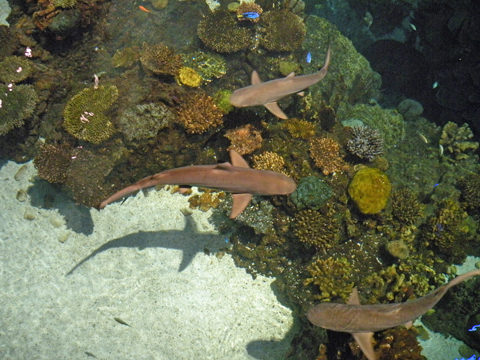